Under the Patient Protection and Affordable Care Act (ACA), all public Exchanges are required to notify employers when an employee is receiving a subsidy (tax credits and cost-sharing reductions) for individual health insurance purchased through an Exchange. According to the final rules published in August 2013, employers have the right, but are not required, to engage in an appeal process through the IRS if they feel an employee should not be receiving a subsidy because the employer offers minimum value, affordable coverage.

Some states began sending notices from public Exchanges indicating that one or more employees are currently receiving a subsidy in 2015, but the U.S. Department of Health and Human Services (HHS) announced that all federally-facilitated Exchanges will begin sending notices in 2016. Just because the employer receives a notice, it does not mean the employer will actually owe a penalty payment under Section 4980H.

Dan Bond, Principal, Compliancedashboard, offers this important commentary: “I think it’s important for employers to remember that just because they may receive one of these notices from the IRS telling them that one of their employees is receiving a subsidy on the exchange, it does not necessarily mean the employer has exposure to a penalty. There are various reasons that someone might have received a subsidy so the employer can use this notice to determine exactly why and whether or not they have any exposure. In fact, small employers will also receive these notices and they are not even subject to the employer shared responsibility mandate so they will not be subject to penalties, regardless.” 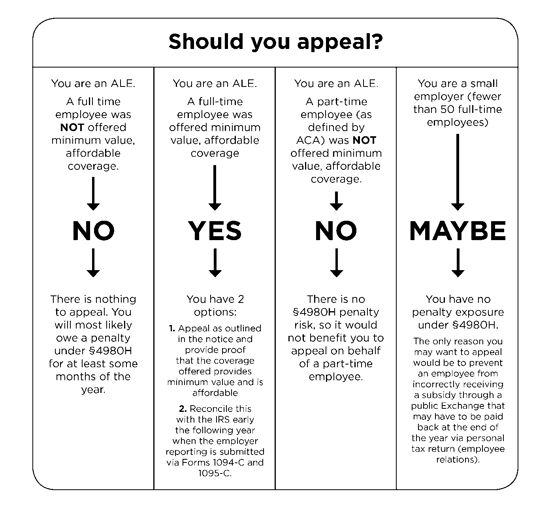 Appeal Form and Process
So long as the requirements in the final rules are met, each state Exchange is allowed to set up its own process and procedures. Information about how to file an appeal is usually included in the notice, but it may be necessary to check with the applicable Exchange to find out exactly how to handle the appeals process, the particulars of which are managed by each Exchange separately.

The form currently used by federally-facilitated Exchanges, as well as by eight states, may be found on Healthcare.gov (approximately half of the states are currently using this form and process). The forms and processes for all other states may be found by visiting a state’s Exchange site. The process generally involves filing a paper appeal, providing documentation, and in some cases participating in a hearing.

Conclusion
The employer does not have to appeal to avoid a penalty under Section 4980H, and penalties will not apply until after the employer reporting (via Forms 1094-C and 1095-C) is reconciled. There is some speculation that it may be more beneficial to appeal with the Exchange rather than waiting to appeal later with the IRS. This is a fairly new process, so the best approach for employers may remain somewhat unclear until the first year of employer reporting is completed.

Filing an appeal as soon as possible may help avoid hassles with the IRS and prevent the individual from receiving a subsidy for which they are ineligible. At the same time, although the appeals process does not appear to be a difficult one, it is possible that everything could be cleared up more quickly by simply communicating directly with the employee that they may be receiving the subsidy in error.